I chose to attempt the “Not to Comb” technique for the advanced category. The method I chose used two dividers to achieve the comb look.

After dividing the log mold, one end of the mold was propped up and the soap was poured at the other end with alternating colors. You can find a link to my YouTube video demonstrating the process below.

I made three attempts using this same technique. For the first batch, the batter thickened too much. The second batch was too thin, and the third batch of soap was just right.

The first batch of soap for the October 2018 Soap Challenge Club: 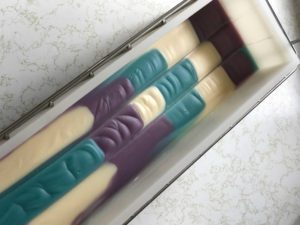 You can see how thick it was by the wrinkling as I continued to pour from the end on the left. The benefit from the thicker soap was clearly defined lines without the soap mixing too much.

Here are the cut bars: 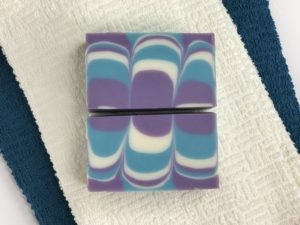 Since the soap batter thickened up too much, I was unable to achieve taller bars. I think the cardboard dividers wiggled around a little too much. You can see how the three sections are uneven.

This soap batch was scented with a mixture of Green Fig and Autumn Fig Harvest. For colors, I used Purple Vibrance Mica and Blue Vibrance Mica, along with titanium dioxide mixed in water. Green Fig seems to slow down trace in cold process soap, so I think I might have stick blended it too thick before I started to pour the soap.

The second batch of soap for the October 2018 Soap Challenge Club: 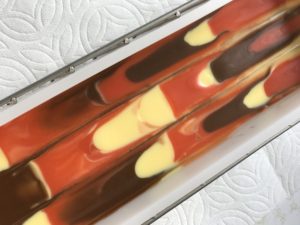 The cut bars for the second batch: 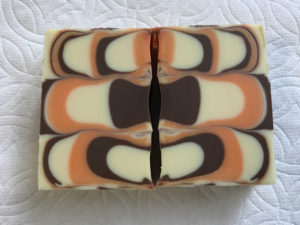 As you can see, I poured this batch a little bit too thin, making it harder to control the shapes. Also, the essential oil blend was a combination of lavender 40/42 and Orange 10x essential oils.

The orange essential oil gave the batter an orange tinge causing me to misjudge and add too little orange mica. During the cure, that color faded leaving me with a lighter orange color. Take a look at how much darker the white batter is compared with how it looks after cutting. Not bad, but not good either!

The colors I used: Titanium dioxide mixed in water, Sunset Orange Mica, and Matte Brown Oxide with a touch of activated charcoal to darken it up a bit.

I used essential oils for this one. It was a combination of lavender, orange 10x, bergamot, and ginger.

Last, and my final entry for the October 2018 Soap Challenge Club: 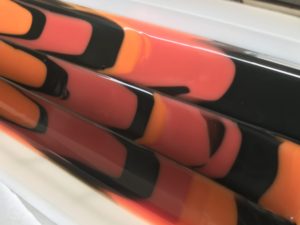 Unmolded and ready to cut: 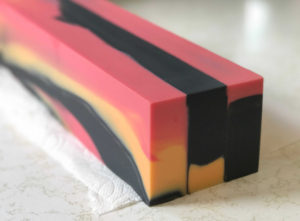 The cut bars for the final batch: 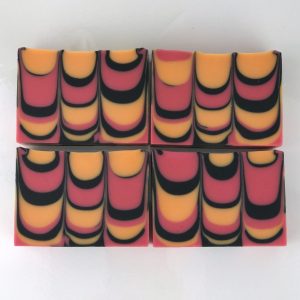 The final bars for this batch are more even, have brighter colors and the dividing lines are straighter. The key to getting this right is the thickness of your soap and the length of time available for pouring.

So, using essential oils that slow down trace was the number one trick for this method. By slowing down trace, I was able to have a thicker batter when I started pouring; however, it thickened up at a slower rate allowing me to pour more of the soap into the mold. The result was nice curved lines and a taller bar.

Because this design had a geometric feel to it, I wanted to emphasize that. I also thought it would be cool to show as many of the bars as possible to compare the variation between the elevated end and the pour end of the soap loaf.

Here is the final photograph for the October 2018 Soap Challenge Club:

The fun geometric display paid off! The soap challenge club awarded my “Orange & Anise” stack of soap the “Best Presentation” award in the Advanced Category. Thanks to everyone in the Soap Challenge Club for their kindness and support!

If you would like to watch this technique in action with the Orange & Anise bars, here is the video:

The Soap Challenge Club brings together soap makers from all over the world to learn, network and compete in their monthly challenges. It is truly and awesome community to be involved with! You can find all of this, along with current and past tutorials at http://www.soapchallengeclub.com 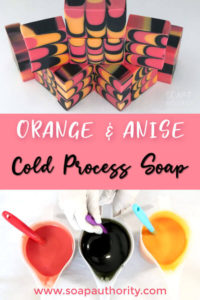 Jaimie has a bachelor's degree in business with a major in accounting. When she isn't obsessing over making soap, she can be found gardening, or cuddling her rescue rabbits while "geeking out" on Star Trek and Star Wars shows.
by Jaimie | 0 comments